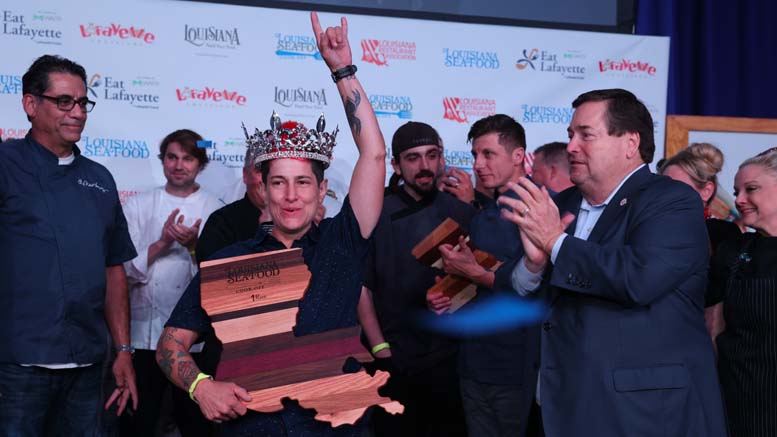 NEW ORLEANS – Lieutenant Governor Billy Nungesser and the Louisiana Seafood Promotion and Marketing Board are excited to announce Chef Amanda Cusey of Villa Harelquin in Lake Charles – the reigning Queen of Louisiana Seafood – will face-off against 13 other chefs from around the country to the nation’s ultimate seafood cooking competition, the 18th Annual Great American Seafood Cook-Off.

In June, Chef Amanda Cusey bested 11 other chefs to win the 15th Annual Louisiana Seafood Cook-Off and become the second ever Queen of Louisiana Seafood. Chef Cusey prepared a pan-seared red drum over a tomato polenta with a crawfish cream sauce showcasing her creativity and highlighting the superior quality of the seafood that comes from Louisiana’s shorelines and vast waterways.

Chef Amanda Cusey serves as the Executive Chef at Lake Charles’s Villa Harlequin. She began developing her passion for food while growing up in the southwest United States. Traveling extensively throughout the U.S. and Europe, Chef Amanda received her Cordon Bleu training at the Tante’ Marie Culinary Academy in Surrey, England. Working her way up through the ranks at several restaurants in England and Ireland, she cemented her love of Italian cuisine while working under the guidance of Kristan Burness and Brendan Ward at Fiorentina in Dublin where she ultimately earned the position of Head Chef. Prior to coming to Lake Charles, Chef Amanda worked with Michelin Star chef Oliver Dunne as Head Chef at his Italian-inspired pop-up restaurant, Eatily in Dublin’s city center. Chef Amanda is now embracing her home and bringing her twist on Italian cuisine to downtown Lake Charles at the Villa Harlequin Restaurant.

The 2022 Great American Seafood Cook-Off will be held at the Ernest N. Morial Convention Center in New Orleans on Saturday, August 6. The 18th annual event gets underway with Opening Ceremonies at 11:15 a.m. as 14 chefs, each representing their home state, cook in front of a live audience and a panel of nationally acclaimed judges.

“The Great American Seafood Cook-Off is the perfect stage to celebrate Louisiana and America’s domestic seafood industry – the best in the world,” said Lt. Governor Billy Nungesser. “This year there will be a very talented field of chefs from all over the country vying to be crowned the next ‘King or Queen of American Seafood’ right here in New Orleans. Each chef will be showcasing their skills with domestic seafood to present the best seafood dishes.”

During the competition, each chef will prepare a dish highlighting the use of domestic seafood while interacting with the live audience, celebrity hosts Chef Cory Bahr – Food Network Star Finalist, Food Network Chopped! Champion, and a former King of Louisiana Seafood – and KLFY TV10’s Gerald Gruenig, along with “chef ref” Chef Keith Frentz, also a former King of Louisiana Seafood. Each dish will be presented to a panel of nationally renowned judges who will score based on presentation, creativity, composition, craftsmanship, and flavor. The Great American Seafood Cook-Off promotes the quality and variety of domestic seafood found in the United States.

To be eligible to compete in the event, chefs must either hold the current title of King or Queen of Seafood or be appointed by the lieutenant governor of their respective state or territory. The reigning King of American Seafood, Mississippi’s Chef Austin Sumrall of White Pillars Restaurant in Biloxi won the title with his dish of Snapper Three-ways, including a raw preparation, snapper ribs, and a poached snapper jowl pho. Chef Sumrall bested 12 of the best chefs from around the country.

The event is held in conjunction with the Louisiana Restaurant Association Showcase. Tickets are $10 at the door.

Previous winners of the Great American Seafood Cook-Off include:

For more information on the competition, visit www.louisianaseafood.com/great-american-seafood-cook.

Published in Government, Lagniappe and Professional