Son of a Saint Receives $500,000 Donation from The Goss Family to Benefit Tuition Scholarship Program 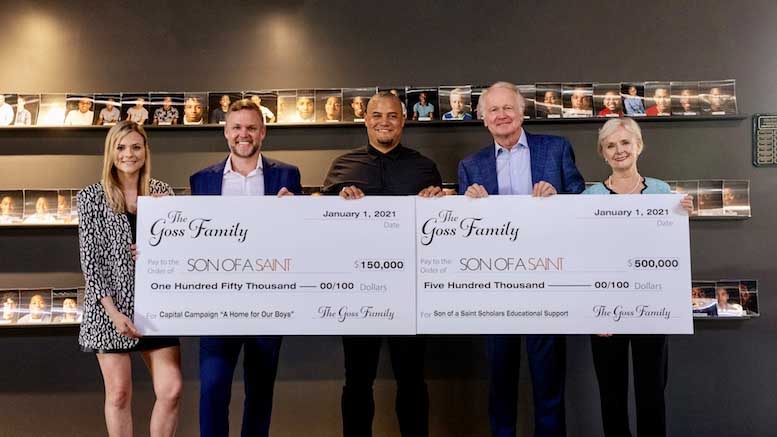 NEW ORLEANS – Son of a Saint, the nonprofit dedicated to inspiring mentorship and transforming the lives of New Orleans’ fatherless boys, received a $500,000 donation from the Goss family-supporting Son of a Saint Scholars, the organization’s state government-authorized School Tuition Organization (STO), which collects and uses taxpayer donations to provide scholarships to students that meet the program’s income requirements to attend nonpublic schools. Son of a Saint Scholars is one of only three STOs approved by the Louisiana Department of Education to provide critical funding aid to students attending the tuition-based schools throughout the state.

The Tuition Donation Credit Program, a system established by the Louisiana Legislature, allows for STOs and also empowers Louisiana families with the financial resources to choose the school that best prepares their child for college and careers. Based on the program’s criteria, all STOs are tax-exempt, not-for-profit organizations with 501(c)(3) status. Taxpayers then earn a significant 95 percent credit toward their Louisiana state tax liability for the year in which they make a donation to a particular STO.

“The Goss family and our firm, Goss Advisors, are proud to be longtime supporters of Son of a Saint. They are making a real difference in the lives of young men, which in turn, makes an incalculable difference in our world,” says longtime Son of a Saint supporter Alex Goss. “Few organizations have such a direct impact in our community, and the results of Son of a Saint speak for themselves. Now, more than ever, we need young men becoming leaders in their communities. If you have the opportunity, please support this wonderful organization.”

“The Goss family has shown longtime support to our organization since day one, and their level of giving has grown along with our boys,” says Son of a Saint Founder and CEO Bivian “Sonny” Lee III. “We are immensely grateful for their belief in our leadership, our organizational model and, most importantly, in our young men and their limitless futures.”

Since its inception in 2011, Son of a Saint has increased its mentee participants from 10 boys to now include 130 young men across Greater New Orleans. That constitutes a more-than-tenfold increase in its first decade. As Son of a Saint continues the crucial work of mentoring and enhancing the lives of fatherless young men in the New Orleans area, the organization is poised to add more programming, more mentors and more boys to its cause, reaching 200 mentee participants by the end of 2021. Son of a Saint holistically supports young men between the ages of 10 and 18, providing them with mentorship, education, mental health services and travel experiences, as well as internship and service-learning opportunities.

For more information about the organization, including programming, enrichment activities, leadership profiles and opportunities to get involved, visit www.sonofasaint.org or call (504) 655-8416. Son of a Saint also welcomes contributions or other donations, which can be mailed to 2803 Saint Philip St. New Orleans, LA 70119. Follow Son of a Saint on Facebook, Instagram or Twitter via @sonofasaintorg for live updates about the organization and its participants.

Published in Kids and Non-Profit