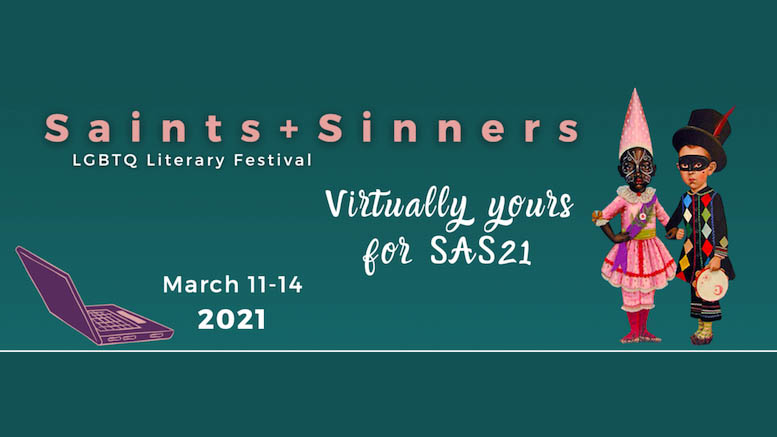 NEW ORLEANS – The Saints & Sinners LGBTQ Literary Festival returns for its 18th conference to be held online March 11-14, 2021. As in past years, the virtual SASFest will also include literary discussions, writing workshops, readings, and special events, all via Zoom or YouTube. SASFest also offers established and emerging LGBTQ authors, as well as students and readers, an opportunity to network via Padlet, a free community building app, and nurture their craft with a diverse array of artistic and educational offerings.

Literary panels and discussion topics include a wide array of genres including mystery, romance, young adult, poetry, memoir vs. fiction, and short fiction. We also have planned discussions featuring the “Literary Luminaries of the Violet Quill”—Anderew Holleran, Felice Picano, and Edmund White along with a discussion of “Jewish Lesbian Literature and Activism” with Elana Dykewomon, Judith Katz, Irena Klepfisz, and Michele Karlsberg.

A new addition to the Festival lineup is a Conversation Series featuring authors interviewing authors. Bryan Washington will discuss his first novel Memorial, a New York Times Noteable Book of 2020, with author Matthew Griffin; Scholar & Poet Julie R. Enszer will facilitate a dialogue with literary icon Judy Grahn regarding her new book, Eruptions of Inanna: Justice, Gender and Erotic Power; Journalist Merryn Johns will discuss sex and censorship and the modern gay rights movement with author and political activist Naomi Wolf; Founder of the Son of Baldwin media community, Robert Jones, Jr. discusses his groundbreaking new novel The Prophets,recently featured in the New York Times, with The Reading Life’s Susan Larson; and Jenn Shapland and Carlos Dews discuss their passion for the work of Carson McCullers. Dews is the founding president of the Carson McCullers Society and Shapland was a 2020 National Book Award finalist for her work My Autobiography of Carson McCullers.

Fauxnique performs excerpts from her provocative cabaret works and reads passages from her forthcoming drag memoir Faux Queen; The New Orleans based band TheSlick Skillet Serenaders play a set of their 20s and 30s era Ragtime, Blues, and Jazz music stylings; and a partial screening and discussion of the Project Legacies documentary, In Her Words: 20th Century Lesbian Fiction.

Tickets and Bookstore: Tubby & Coo’s Mid-City Book Shop is the official bookstore of Saints and Sinners and donate a portion of sales back to the Festival. All events are free this year with the exception of the Writing Workshops. Tickets on sale at www.sasfest.org.

About Saints and Sinners
Since 2003, Saints + Sinners Literary Festival brings together the who’s who of the LGBTQ literary world. The Festival features panel discussions and writing workshops by authors, editors, and publishers for emerging writers and LGBTQ literature fans. Our website is www.sasfest.org. Follow @SASFest on Twitter and Facebook for updates. #SAS21

Saints + Sinners is made possible through the generous support of our premier sponsor, the John Burton Harter Foundation. Major support also provided by the National Endowment for the Arts, Kindle Direct Publishing, and by a grant from the Louisiana Division of the Arts, Office of Cultural Development, Department of Culture, Recreation and Tourism, in cooperation with the Louisiana State Arts Council; additional funding by Bold Strokes Books, the Times Picayune | New Orleans Advocate, Tubby & Coo’s Mid-City Bookshop, and the Midlo Center for New Orleans Studies at the University of New Orleans.

Published in Events and LGBTQ+