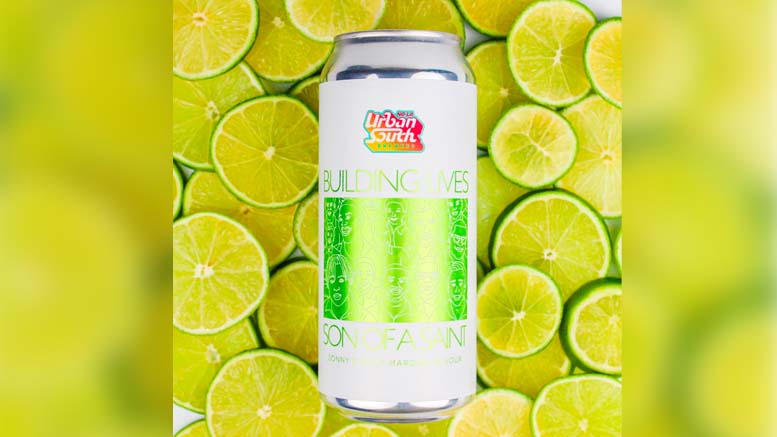 NEW ORLEANS –  Urban South Brewery is proud to announce the third edition of Building Lives, a new release brewed in collaboration with New Orleans’ Son of a Saint. Building Lives is a sour beer fruited with sweet Valencia orange and lime juice, finished with a touch of agave syrup, sea salt and chipotle pepper. The new brew pays homage to the signature Sonny’s Margarita created by Son of a Saint and Felipe’s Taqueria.

“I’ve had an amazing experience participating as a mentor in the Son of a Saint program for the past few years, and I’ve seen firsthand how impactful the work they are doing is in our community,” said Alex Flores, Head Brewer for Urban South. “We’re thrilled to work with the Son of a Saint team again on this third collaboration and will continue to support this amazing organization in any way we can.”

Building Lives will be available on draft and in cans at Urban South’s Tchoupitoulas Street taproom starting at 12:00 p.m. on Friday, June 17. A portion of the proceeds from beer sales will be donated to Son of a Saint to support its mentorship program. Urban South released its first edition of Building Lives in collaboration with Son of a Saint in the summer of 2021, with a second edition following in January 2022.

Founded by Bivian “Sonny” Lee III in 2011 in honor of his late father and single mother, Son of a Saint strives to transform the lives of fatherless boys through mentorship, emotional support, development of life skills and the formation of positive, lasting peer-to-peer relationships. Focused on children ages 10-12, the Son of a Saint program equips these boys with the tools they need to become productive men, graduating self-sufficient, independent thinkers who are leaders and give back to their communities. To learn more, visit sonofasaint.org.

Published in Food/Beverage, Goodwill and Kids