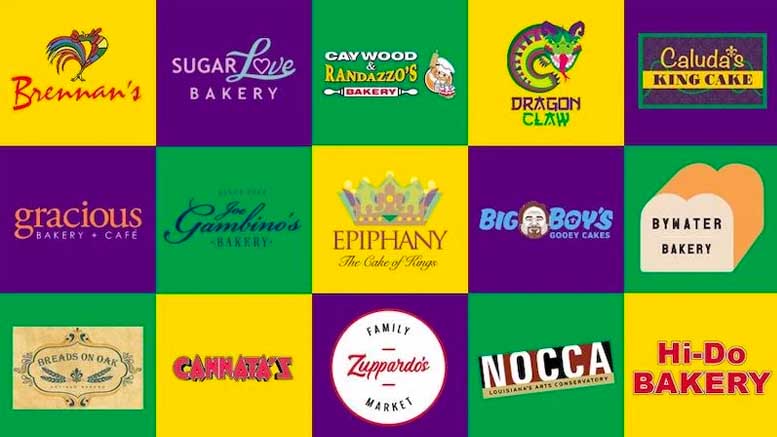 King Cake Hub is thrilled to announce a second pop-up location at The Gift Shop at Historic New Orleans Collection at 520 Royal Street. The partnership with HNOC is set to coincide with the upcoming Masking Mardi Gras exhibition opening January 6, 2022.

This will be King Cake Hub’s fourth year selling a wide assortment of the best king cakes you have ever and never tasted and will include new king cake offerings from several of our partner bakeries. Brennan’s is back this year with their Traditional and Pink Parade king cakes as well as a yet to be revealed “Special Release” filled king cake which all Coterie members will receive on January 6th. In addition to Brennan’s, NOCCA’s students are back in the kitchen working with Steve Himelfarb and the team from now shuttered Cake Cafe offering their hugely popular Goat Cheese Apple and new this year will be a Gluten and Dairy Free cake. Other returning partners are Caludas’s, Cannata’s, Caywood and Randazzo Bakery, Joe Gambino’s Bakery, Hi-Do Bakery, Bywater Bakery, Breads on Oak, Gracious, Bittersweet, Sugar Love and Big Boys Gooey Cakes will be back for season four!

The 2022 King Cake Coterie is on sale now with exciting new offerings and a discount for early shoppers. The Coterie is a King Cake of the Week Club featuring a different king cake each week. Brennan’s is launching Season 4 and then Cannata’s will be debuting a new Salted Caramel King Cake which is sure to be a hit. NOCCA, Bywater, Gracious, Gambino’s and Caluda’s will also be included. The Coterie makes a great holiday gift. In addition to the early bird discount the first 30 Subscribers will receive one of our amazing t-shirts by Studio Mundi!

This will be a bittersweet year as we mourn the loss of Will Samuels who had the crazy genius idea to bring all your favorite king cakes to one shop. Will’s wife and daughter will proudly and joyously continue the legacy which has delighted and overwhelmed king cake lovers for three years.

King Cake Hub will be open daily from 8:30am until 6:00pm beginning January 6 through Lundi Gras. Delivery will be available through Door Dash. Our annual Carnival Kickoff party will be co-hosted with our friends at Zony Mash. Stay tuned for the full line up which will be announced soon via King Cake Hub’s social media sites on Facebook, Twitter, Pinterest, Instagram and YouTube.

Published in Culture/Society, Food/Beverage and Holidays