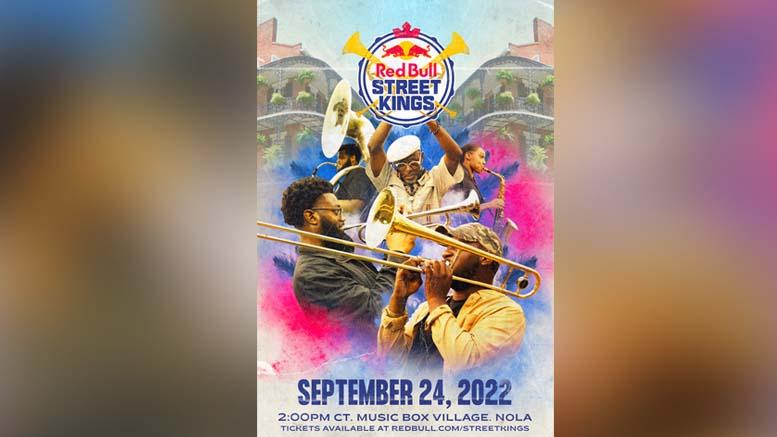 NEW ORLEANS – The brass band competition that made soundwaves throughout New Orleans in 2010 and 2013 is making its return to the Big Easy on Saturday, September 24. Red Bull Street Kings is a celebration of brass band traditions, merging the rich musical legacy of New Orleans with its progressive hip-hop culture. Music Box Village, a whimsical playground for interactive sounds, will set the stage for the long-awaited return of Red Bull Street Kings as spectators savor the sounds of classic brass paired with present-day lyricism.

Kings of Brass (K.O.B), Sporty’s Brass Band, Big 6 Brass Band, and Young Pinstripe Brass Band will go head-to-head in two rounds, with only two bands advancing to the finals. The event will be hosted by Downtown Lesli Brown. Each band was chosen by a culture panel who are ingrained in the community curated by Nicole Robinson, a leader in the world of music, entertainment, and event production.

The bands won’t be the only ones creating soundwaves, as the competition judges bring flavor and credibility of their own. Mia X is a hip-hop icon who is weaved into the brass band and Second Line culture. She will be joined by Curren$y, the Underground Rap King and the “Pilot” of the JetLife phenomenon. Christie Jourdain of the Original Pinettes, Deputy Director of Arts and Culture Alana Harris, and Band Director Chris Herrero will also judge the competition. Bands will be scored on-stage appearance, material, energy, musicality, and innovation. DJ Kelly Green and Host Downtown Lesli Brown will bring the energy between sets, in addition to guest performances throughout the event.

In the first round, each band will Second Line into the venue, performing a traditional brass song. The second round will pay tribute to the rich legacy of New Orleans music, paired with present-day artists in the ultimate collaboration. Each group will infuse the sound of a Southern-based hip-hop artist, including Stone Cold Jizzle, Alfred Banks, $leazy EZ, and Treety. The band left standing after three rounds of competition will be crowned the winner and receive a grand prize.

“This type of collaboration with brass can only be done in New Orleans,” said hip-hop artist Treety. “The culture, the people and the bands are different here.”

Previous Red Bull Street Kings winners include the Stooges Brass Band in 2010, and the Original Pinettes who were appropriately named the Street Queens in 2013.

“This is not just a novelty,” said Natasha Harris of the Original Pinettes. “This is career, this is culture, this is family. To let the world see what we do in New Orleans is wonderful.”

Published in Events and Music