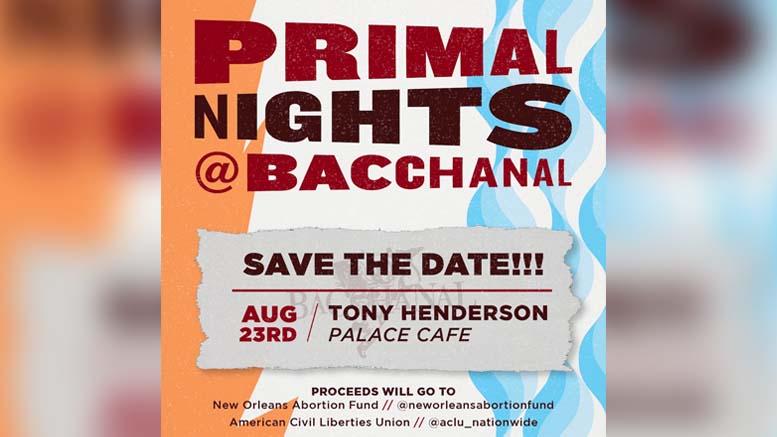 NEW ORLEANS – Primal Nights is held in Bacchanal’s yard every other Tuesday and is currently taking place now through November, featuring a series of guest chefs from restaurants around New Orleans (and around the country!). This year’s proceeds will be donated to the American Civil Liberties Union and the New Orleans Abortion Fund, with over $6,000 raised thus far.

Up next, on August 23, is Chef Tony Henderson of Palace Café, followed by Chef Alon Shaya from Saba and Pomegranate Hospitality on September 6.

Chefs finishing up the roster include Chef Alex Harrell from the Virgin Hotel, Chef David Slater from Emeril’s Group, Chef Jacquiline Blanchard from Oak’s newest hot spot, Sukeban, and Chef Mason Hereford from Turkey and the Wolf and Molly’s Rise and Shine.

ABOUT: Primal Nights began in 2017 as a way for Bacchanal to raise money for international nonprofit Pure Water 4 Kids following Hurricane Maria’s devastation in Puerto Rico. The events were such a success that the Bacchanal team kept them going to further encourage community collaboration while giving back to a good cause. Since its inception, Primal Nights have raised more than $100,000 for notable local and international causes including the New Orleans Musicians Clinic, Emeril Lagasse Foundation, Capoiera and Brazilian Cultural Arts Center New Orleans, Bike Easy, Puerto Rico Hurricane Relief, No Kid Hungry, Planned Parenthood, NAMI and many more.

Published in Events, Food/Beverage and Goodwill