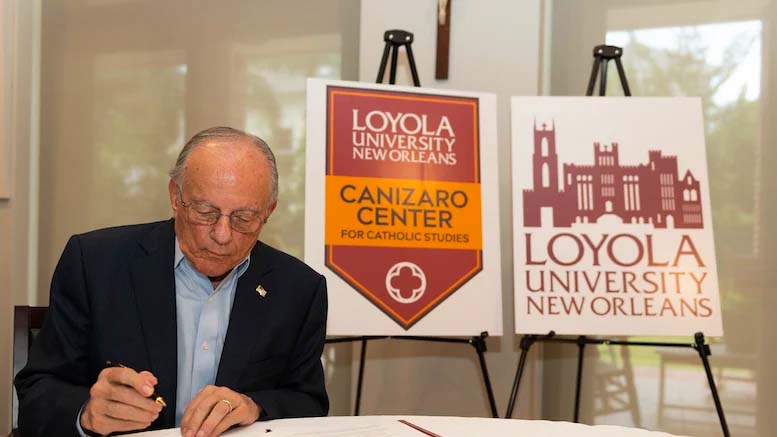 NEW ORLEANS — Joseph C. Canizaro has committed a gift of $5 million to Loyola University New Orleans to establish and fund the new Canizaro Center for Catholic Studies at Loyola. Canizaro has been a Loyola supporter and a leading Catholic philanthropist in the Gulf South for decades. The Canizaro Center for Catholic Studies is designed to position Loyola as a leader in Catholic studies in the United States and on an international level. An endowed fund will support the hiring of new faculty and staff, grow resources for students (such as retreats, international service pilgrimages, and high school student faith development programs), educate K-12 Catholic elementary teachers, and provide scholarships for Loyola students to study abroad in Rome.

“Sue Ellen and I are blessed to be able to give this gift to Loyola, a historic Catholic university,” said Canizaro. “We are guided by God in our dedication to growing the Catholic faith, and it is our hope that this endowment will allow Loyola University to become a leader in Catholic studies both in New Orleans and around the world.”

“With great joy, we look forward to launching the Canizaro Center, which will allow us to grow our Catholic Studies program and promote the Catholic intellectual tradition and Jesuit spirituality,” said the Rev. Justin Daffron, interim president of Loyola. “This exciting new endeavor will advance the Roman Catholic Church in our region. New pilgrimages, retreats, and scholarships will help provide the formative experiences to develop leaders in service to others.”

Fr. Nathan O’Halloran, who joined Loyola in 2020, will serve as the first center director. Since arriving at Loyola, O’Halloran has organized speakers, retreats, conference and travel opportunities, a pilgrimage to Mexico City this summer, and new plans for a Loyola Catholic Studies program in Rome.

Published in Education, Goodwill and Religion