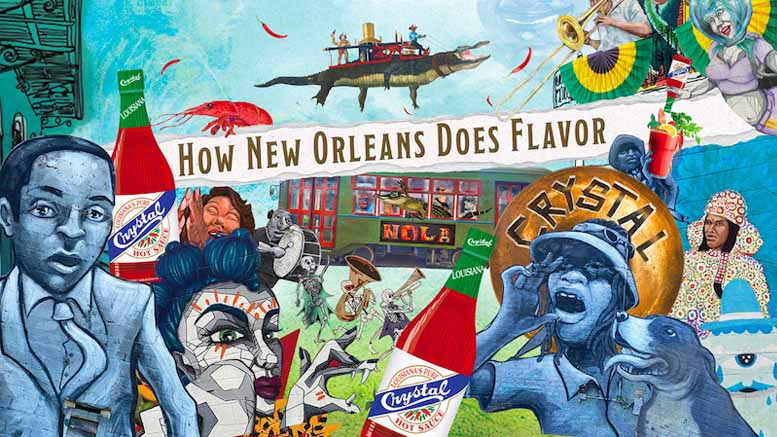 NEW ORLEANS – Crystal Hot Sauce recently launched a new campaign entitled “How New Orleans Does Flavor,” which salutes all the ways the city delights the five senses. “The flavor of New Orleans is more than just about taste; it’s about sounds, and sights, and feelings,” said Pepper Baumer, president of Baumer Foods, the company that owns Crystal Hot Sauce. “At a time when our city is hurting, we need to support all of those that provide the flavor of New Orleans—the musicians, the artists, the hospitality industry. We created this campaign with them and for them. The ‘How New Orleans Does Flavor’ promotion showcases the unique talents of the people of this city.”

The music was composed by Oscar/Golden Globe winner Donny Markowitz and produced by famed Grammy winner Misha Kachkachishvili of Esplanade Studios. The soundtrack features Markowitz on bass, Stanton Moore of Galactic on drums, and Brandon Lewis and Charlie Gabriel of Preservation Jazz Hall on trumpet and sax/horns, respectively.

Since its founding, Crystal Hot Sauce has supported the unique culture of the city. Most recently, they’ve partnered with the Krewe of Red Beans to employ Mardi Gras artists and to feed our culture bearers through the “Hire a Mardi Gras Artist” campaign and with a generous donation to “Feed the Second Line.” They’ve also sponsored Tipitina’s live stream concerts throughout the pandemic. In addition, as part of a joint venture with MR EatWell, Crystal donated funds from the sale of brand merchandise to the Greater New Orleans Foundation’s Service and Hospitality Employee Assistance Program. This April, Crystal Hot Sauce will be the main sponsor of the Nola Footwork Fest, a four-part concert series created by trombonist Corey Henry at The Broadside Theatre.