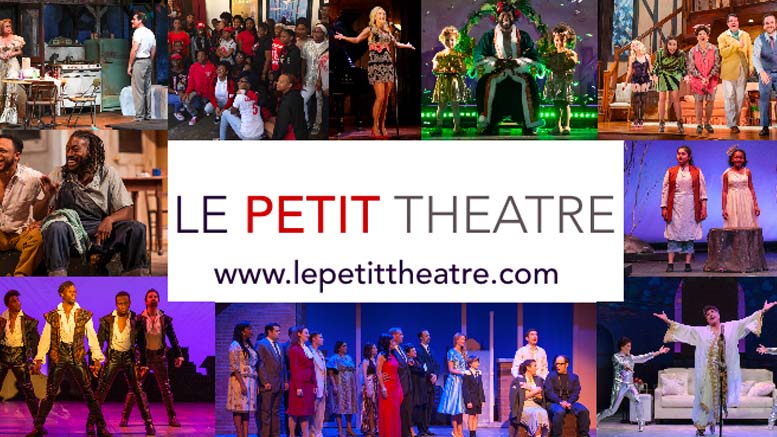 Dear Mr. Williams is an authentic and wonderfully theatrical coming-of-age one-man play set in the colorful, sensuous, and magical city of New Orleans. Told both through the humorous and sometimes heartbreaking voice of its native son author, Bryan Batt, as well as through the celebrated works of Tennessee Williams. Drawing from the iconic writer’s noted classic plays to his more obscure poetry and short stories, an enthralling tale of discovery is woven as Tennessee’s masterful words inspire the narrative celebrating exciting revelations and undeniable truths. Life’s mysterious and magical journey can be a turbulent rollercoaster ride, but it’s so much more thrilling with Tennessee Williams as your guide.

The season continues with 2019 Tony Award nominee for Best Play, Choir Boy, written by Tarell Alvin McCraney, who won the 2017 Academy Award for his adapted screenplay of the film Moonlight. In the soaring, music-filled Choir Boy, the Charles R. Drew Prep School for Boys is dedicated to the creation of strong, ethical black men. Pharus wants nothing more than to take his rightful place as leader of the school’s legendary gospel choir. Can he find his way inside the hallowed halls of this institution if he sings in his own key?

Sensuous, witty, heartbreaking, and uplifting, the 2019 Obie Award-winning, The House That Will Not Stand by Marcus Gardley unearths a story about free women of color in 1836 New Orleans, where Black Creole women entered into common-law marriages with rich white men. But the house that Beartrice built—on a foundation of wealth, freedom, and secrets—threatens to collapse after her man mysteriously dies and her three unwed daughters realize that his money could cost them the people they love. The House That Will Not Stand is a humorous and gripping family drama told in a rich and lyrical river of words.

Nina Raine’s Tribes took New York theatre by storm, where it won the 2012 Drama Desk Award for Outstanding Play. In this searing comedy, we meet Billy who was born deaf into a hearing family. He was raised inside its fiercely idiosyncratic and politically incorrect cocoon. He has adapted brilliantly to his family’s unconventional ways, but they’ve never bothered to return the favor. It’s not until he meets Sylvia, a young woman on the brink of deafness, that he finally understands what it means to be understood.

“There’s so much going on in…TRIBES that it’s almost overwhelming: intellect and sentiment, love and cruelty, witty zingers and biting put-downs. But in Nina Raine’s dazzling play, too much is a good thing.” —NY Post.

Finishing out the season is the musical A Night with Janis Joplin!  Like a comet that burns far too brightly to last, Janis Joplin exploded onto the music scene in 1967 and, almost overnight, became the queen of rock & roll. The unmistakable voice, filled with raw emotion and tinged with Southern Comfort, made her a must-see headliner from Monterey to Woodstock. Fueled by such unforgettable songs as “Me and Bobby McGee,” “Piece of My Heart,” “Mercedes Benz,” “Cry Baby” and “Summertime,” a remarkable cast and breakout performances, A NIGHT WITH JANIS JOPLIN, written and directed by Randy Johnson, is a musical journey celebrating Janis and her biggest musical influences—icons like Aretha Franklin, Etta James, Odetta, Nina Simone and Bessie Smith, who inspired one of rock & roll’s greatest legends.

Subscription renewals begin on June 21 and new subscription sales start in July. Single tickets will be available in late summer.

SUBSCRIPTIONS: Get best available seats and 20 – 40% off single ticket prices.

Published in Arts, Creative and Events