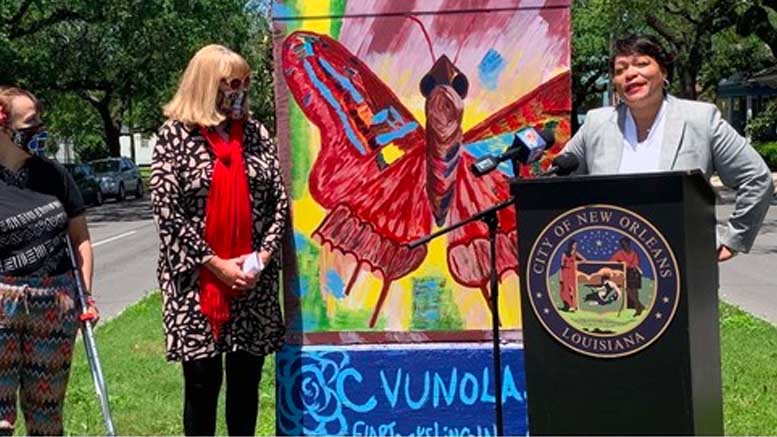 Photo provided by the mayor's office.

“As Louisiana Avenue was moving through its SELA project, this was our opportunity once the project was completed to also show some love to this area of the city. And it was showing love through our art, through our culture, and of course by meeting our artists where they are so that we can beautify our community,” said Mayor LaToya Cantrell.

The 10 new installations mark more than 250 public art projects in metro New Orleans completed by CVU, a community nonprofit organization that is focused on projects that beautify neighborhoods and help local artists. The Art Box project started during the recovery from Hurricane Katrina. Jeannie Tidy, Vice President and Founder of CVU, noticed that the traffic utility boxes were a magnet for graffiti. She also noticed that many of her artist friends were suffering from a lack of economy. The project was started to help local artists and to eliminate graffiti in the process.

CVU has created an economic engine for New Orleans artists. These artists in turn go out in their communities and purchase goods and services. National data findings say that the arts industry has generated $166.3 billion of economic activity and $63.8 billion by the nation’s arts and culture organizations. This economic activity supports 4.6 million full-time jobs and generates $49.5 billion in resident household income.

In terms of effects on society, there is strong evidence that participation in the arts can contribute to community cohesion, reduce social exclusion and isolation, and/or make communities feel safer and stronger.

Art is communication and allows people from different cultures and different times to communicate with each other via images, sounds and stories. Art also is often a vehicle for social change. It can give voice to the politically or socially disenfranchised. When CVU has identified a box for an art installation, it puts out the call among the registered artists to submit a design. A design committee made up of art professionals plus a neighborhood representative choose the design.

CVU found, from the very beginning, that working with each neighborhood on the design was key to approval. This has helped the project expand as other neighborhoods call to find out how to get boxes in their area. CVU also has found that having artists paint utility boxes reduces litter and graffiti and instills a sense of pride in the neighborhoods. It brings attention to local artists and the artwork can inspire people to appreciate art in their community. It also reflects on the culture that is so uniquely New Orleans.

Volunteers prep the boxes by cleaning and priming them, and CVU provides the artists with the paints to complete the artwork. CVU raises money and writes grants to pay the artists for their work. The commission for the artwork on Louisiana Avenue boxes was paid in part by the City of New Orleans’ Wisner Donation and a neighborhood philanthropist. Jeannie Tidy says the artwork gives the artists exposure, with several artists placing their artwork in respected galleries after producing their Art Box. Many of the artists have also received commission from the project.

Published in Arts and Government